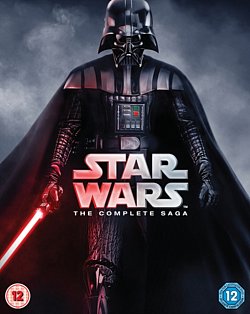 Anunta-ma cand pot comanda
Adauga in Wishlist
Descriere: Acest film nu are subtitrare in limba romana.
All six films from the hugely popular 'Star Wars' series, created and directed by George Lucas. In 'Star Wars Episode I - The Phantom Menace' (1999), Jedi Knight Qui-Gon Jin (Liam Neeson) and his apprentice, Obi-Wan Kenobi (Ewan McGregor), arrive on the planet Naboo on a diplomatic mission. When they are ambushed by Federation robots, they quickly realise that the negotiations they were supposed to take part in are merely a cover for a hostile invasion organised by the evil Siths. Hooking up with the Naboo Queen, Amidala (Natalie Portman), the Jedis manage to escape from Naboo and journey to the planet of Tatooine, where Qui-Gon meets a young slave boy named Anakin, whom he identifies as a potentially powerful Jedi. In 'Star Wars Episode II - Attack of the Clones' (2002), Anakin Skywalker (Hayden Christensen) disobeys the strictures of his Jedi training by embarking on an affair with Amidala (Portman), while his teacher Obi-Wan Kenobi (McGregor)'s investigation into assassination attempts against the Senator leads him to the distant planet of Kamino and a separatist struggle that brings the Galactic Republic to the very brink of civil war. In 'Star Wars Episode III - Revenge of the Sith' (2005), as the Clone Wars rage on, the rift between Chancellor Palpatine (Ian McDiarmid) and the Jedi Council widens. Young Jedi Knight, Anakin Skywalker (Christensen), finds himself caught in the middle, with his allegiances torn. Seduced by promises of power and the temptations of the dark side, he pledges himself to the evil Sith Order, becoming Darth Vader. Jedi Master Obi-Wan Kenobi (McGregor) tries to turn his old Padawan learner back to the light side, leading to a climactic lightsaber battle that may shape the fate of the galaxy forever. In 'Star Wars Episode IV - A New Hope' (1977) young farm hand Luke Skywalker (Mark Hamill) discovers a secret hidden inside his family's droid and becomes involved in a battle between the forces of light and the evil Empire. Along the way he meets up with a Knight of an ancient order (Alec Guinness), a roguish space pilot (Harrison Ford) and a beautiful princess (Carrie Fisher). In 'Star Wars Episode V - The Empire Strikes Back' (1980), the rebels, led by Luke (Hamill) and Leia (Fisher), are on the run from the vengeful Empire. Holed up on an inhospitable ice planet, they are soon discovered and must flee across the galaxy. Luke decides to visit an old Jedi Knight while Han and Leia become involved in a game of cat and mouse with the evil Darth Vader (David Prowse) and a host of bounty hunters. 'Star Wars Episode VI - Return of the Jedi' (1983) is the final installment of the series. With Han Solo (Ford) held captive by Jabba the Hut, his friends plan a rescue mission. The intrepid group then embark on an assault on the new, more powerful Death Star, where Luke must face his destiny in a showdown Darth Vader.
Din aceeasi serie:
Star Wars: Episode V - The Empire Strikes Back 1980 Blu-ray / 4K Ultra HD + Blu-ray Star Wars: Episode V - The Empire Strikes Back 1980 DVD Star Wars: Episode VI - Return of the Jedi 1983 Blu-ray Star Wars: Episode VI - Return of the Jedi 1983 Blu-ray / 4K Ultra HD + Blu-ray Star Wars: Episode VI - Return of the Jedi 1983 DVD Star Wars: The Force Awakens 2015 Blu-ray Star Wars: The Force Awakens 2015 Blu-ray / 4K Ultra HD + Blu-ray Star Wars: The Force Awakens 2015 Blu-ray / Limited Edition Star Wars: The Force Awakens 2015 DVD Star Wars: The Force Awakens 2015 DVD (Rental)