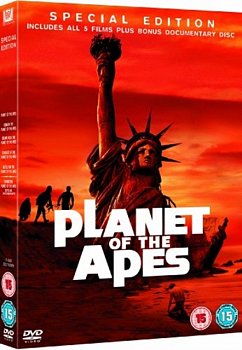 Planet of the Apes Collection 1973 DVD

Anunta-ma cand pot comanda
Adauga in Wishlist
Descriere: Acest film nu are subtitrare in limba romana.
This box set contains all five films in the 'Planet of the Apes' series. In the original film, a group of Earth astronauts, led by Colonel George Taylor (Charlton Heston), are plunged nearly two thousand years into the future after passing through a time distortion. They crash land on a strange planet, where mute humans are treated as slaves by intelligent apes. In 'Beneath the Planet of the Apes', NASA send astronaut Brent (James Franciscus) on a rescue mission when Taylor's crew fail to return to Earth. Like Taylor, he is catapulted through time to the 'Ape' planet, where Taylor is now being held captive in the Forbidden Zone, an underground society whose telepathic mutant inhabitants dedicate their lives to their 'God': an atomic warhead. In 'Escape from the Planet of the Apes', the sympathetic chimps of the first two films, Zira (Kim Hunter) and Cornelius (Roddy McDowall), escape the nuclear devastation of the Earth by travelling back in time in Taylor's spaceship, arriving in Los Angeles in the year 1973. They are initially held in captivity in a zoo, but when they prove their intelligence they are released and hailed as celebrities. In 'Conquest of the Planet of the Apes', the year is now 1991. Following a plague which wiped out all cats and dogs, apes have been adopted as pets by humans, but when Zira and Cornelius' son Caesar (Roddy McDowall) sees them being treated as slaves, he leads his brother simians in rebellion against their overlords. 'Battle for the Planet of the Apes' opens in 2670 with the ape Lawgiver (John Huston) relating how, following the 1991 rebellion, mankind embarked on a terrible nuclear war. In the devastation which followed, Caesar and the apes seized control, ruling benevolently over the human survivors, and working to rebuild society. However, civil war was being fermented by ambitious gorilla general Aldo (Claude Akins). Also included is previously unseen footage and interviews with cast and crew members.
Din aceeasi serie:
Planet Of The Apes - Dawn Of The Planet Of The Apes DVD Planet Of The Apes - Primal Movie Collection (8 Films) DVD Planet Of The Apes 1 to 3 4K Ultra HD Planet of the Apes 1968 DVD / Widescreen Planet of the Apes 2001 DVD Planet of the Apes Collection 1973 DVD / Box Set Planet Terror DVD Predator - Ultimate Edition Blu-Ray Predator 1 to 4 Blu-Ray Predator 1 to 4 DVD