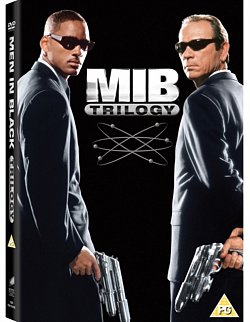 Anunta-ma cand pot comanda
Adauga in Wishlist
Descriere: Acest film nu are subtitrare in limba romana.
Triple bill of sci-fi features starring Will Smith and Tommy Lee Jones as a pair of agents tasked with keeping extraterrestrial inhabitants of Earth in check. In 'Men in Black' (1997) New York cop James Edwards (Smith) finds himself recruited to the secret MiB agency, where he is partnered with K (Jones) and sent to investigate an alien prediction of the end of the world. Initially, the partnership doesn't gel, but with fearsome alien adversaries to take on K and J come to rely on each other. 'Men in Black 2' (2002) finds K working as a postman, unaware of his former heroics alongside Agent J. However, when J uncovers a secret alien plot organised by the seductive Serleena (Lara Flynn Boyle) he knows he will require the skills of his former partner to foil such a dangerous enemy. In 'Men in Black 3' (2012) J is forced to journey back in time to the 1960s to try and rescue K, who has been assassinated with such extraterrestrial efficiency everyone on Earth appears to believe he has been dead for 40 years. With the aid of a terrifying 'time jump', J hooks up with a younger Agent K (Josh Brolin) and together the pair attempt to change the course of history.
Din aceeasi serie:
Men in Black: International 2019 Blu-ray Men in Black: International 2019 Blu-ray / 4K Ultra HD + Blu-ray Men in Black: International 2019 DVD Men in Black: International 2019 DVD Alt Men in Black/Men in Black 2/Men in Black 3 2012 Blu-ray / Box Set Midnight Special Blu-Ray Midnight Special DVD Mimic 1997 DVD Mimic 2 Blu-Ray Mimic 2 DVD