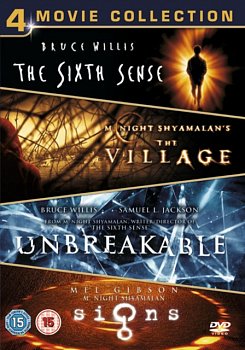 Livrare estimata pentru 22 Aug - 01 Sep
Adauga in cos
Adauga in Wishlist
Descriere: Acest film nu are subtitrare in limba romana.
Box set featuring four films from writer-director M. Night Shyamalan. 'The Village' (2004) is an atmospheric psychological thriller. Covington is a small rural Pennsylvanian village locked into an unusual pact: beyond the village boundaries lurk terrifying creatures, but these creatures have agreed to stay outwith the villagers' territory so long as the villagers do not enter the woods. However, this precarious arrangement is challenged when Lucius Hunt (Joaquin Phoenix), a bold and curious young man, decides to find out what lies beyond the narrow borders of his hitherto confined existence. Adrien Brody, William Hurt and Sigourney Weaver co-star. 'The Sixth Sense' (1999) begins with child psychologist Malcolm Crowe (Bruce Willis) being shot by a former patient, who then also kills himself. Feeling responsible for the death, Crowe sees a chance to assuage his guilt by helping the troubled young Cole Sear (Haley Joel Osment), who claims to be haunted by ghosts. As the bond between the doctor and his charge grows, Crowe becomes more and more estranged from his wife, who he suspects of having an affair. In 'Unbreakable' (2000) David Dunn (Willis), the sole survivor of one of the worst train crashes in US history, is unable to explain why he should have been spared the terrible fate which befell all his fellow passengers. But then, when he meets the mysterious Elijah Price (Samuel L. Jackson), he is encouraged to begin asking himself important questions. Why has he never fallen sick? Why has he never been injured? What purpose could there be to his special gifts? In 'Signs' (2002) widower and ex-minister Graham Hess (Mel Gibson) reassures his two young children that everything is going to be OK when crop circles begin mysteriously appearing in the fields of Bucks County, Pennsylvania. But sightings of an alien figure around the Hess farm, along with news that crop circles are appearing all over the world, soon has everyone anticipating the worse. All the signs point towards an extra-terrestrial visitation, but will it be a friendly encounter or a hostile invasion?
Din aceeasi serie:
Looper Blu-Ray Looper DVD Lucy 4K Ultra HD Lucy Blu-Ray Lucy DVD M. Nobody DVD Mankinds - Last Stand DVD Marjorie Prime Blu-Ray Marjorie Prime DVD Master Of The World DVD