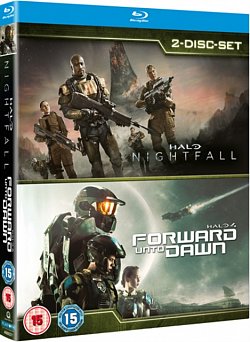 Livrare estimata pentru 11 Jul - 21 Jul
Adauga in cos
Adauga in Wishlist
Descriere: Acest film nu are subtitrare in limba romana.
Double bill of the sci-fi action drama series based on the successful computer game franchise. In 'Halo 4: Forward Unto Dawn' (2012), it is the year 2525, and Thomas Lasky (Tom Green), a cadet at the military academy of the United Nations Space Command, is in a state of turmoil. In training to fight against human insurrectionaries from the rebellious outer colonial planets, he has doubts about whether the war is justified and worries that this will affect his performance on the battlefield. However, when the academy is attacked by an alien race his allegiances aren't in question. Teaming up with a formidable armoured soldier known as the Master Chief (voice of Alex Puccinelli), Thomas battles to protect those he loves from the forces of invasion. In 'Halo: Nightfall' (2015), Agent Jameson Locke (Mike Colter) and his team find themselves caught up in a terrorist attack in the distant land of Sedra. The episodes are: 'It's Only Just Beginning', 'Sourced from Hell', 'Lifeboat Rules', 'Gods of the Damned' and 'Devil Take the Hindmost'.
Din aceeasi serie:
Gravity DVD Guardian of the Universe 2017 DVD Halo 4 - Forward Unto Dawn - Deluxe Edition Blu-Ray Halo 4 - Forward Unto Dawn Blu-Ray Halo 4 - Forward Unto Dawn DVD Halo Legends DVD Hancock / Men In Black / Men In Black 2 DVD Hard To Be A God Blu-Ray Hardcore Henry Blu-Ray Hardcore Henry DVD