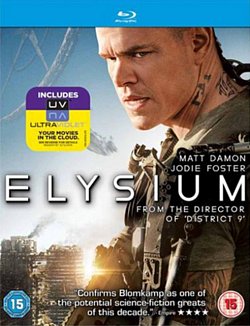 Livrare estimata pentru 19 Oct - 29 Oct
Adauga in cos
Adauga in Wishlist
Descriere: Acest film nu are subtitrare in limba romana.
Neill Blomkamp writes and directs this sci-fi drama starring Matt Damon and Jodie Foster. It is the year 2154 and the wealthy have fled the overpopulated and largely resource-drained Earth in favour of Elysium, a luxurious space habitat located in the planet's orbit. With no poverty, no sickness and no war, the contrast between Elysium and the ravaged planet it revolves around couldn't be starker - and is tough for those left on Earth to bear. When Max De Costa (Damon) learns that he has no hope of beating the cancer that has afflicted him without breaking into Elysium, he understands the scale of the task he has undertaken. With Secretary Delacourt (Foster) charged with enforcing Elysium's strict anti-immigration policies and a team of hardened troops at her disposal, led by the ferocious Agent Kruger (Sharlto Copley), Max faces the battle of his life if he intends to bridge the cosmic gap between rich and poor.
Din aceeasi serie:
Edge Of Tomorrow Ultimate Collectors Edition Steelbook 4K Ultra HD + Blu-Ray Ejecta Blu-Ray Elysium 2013 Blu-ray / 4K Ultra HD + Blu-ray Elysium 2013 DVD Elysium 2013 DVD / with UltraViolet Copy Ender's Game 2013 Blu-ray / 4K Ultra HD + Blu-ray Enders Game Blu-Ray Enders Game DVD Enemy Mine 1985 DVD / Widescreen Equilibrium DVD