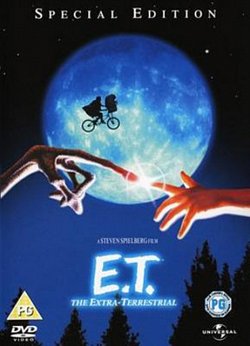 Livrare estimata pentru 11 Jun - 21 Jun
Adauga in cos
Adauga in Wishlist
Descriere: Acest film nu are subtitrare in limba romana.
Steven Spielberg's own re-cut and digitally enhanced version of the 1982 film. Effects have been made more special and certain elements of the original film toned down (particularly the weapons carried by US law enforcement). Previously unused scenes have also been added and the soundtrack digitally remastered. Young Elliott (Henry Thomas) has not had a happy home life since his parents split up. Living with his mother, Mary (Dee Wallace), he is constantly fighting with his older brother, Michael (Robert MacNaughton), and little sister, Gertie (Drew Barrymore). When Elliott finds an alien in his backyard one night, he takes the creature in, christening him 'ET' and aiding him in his efforts to contact his mother ship. ET has various amazing powers, including the ability to heal and make objects levitate, but his growing bond with Elliott is threatened by the fact that government officials are already trying to track him down.
Din aceeasi serie:
Dune 2021 Blu-ray / 4K Ultra HD + Blu-ray Dune 2021 DVD Dune Blu-Ray Dune DVD Duplicate DVD Earth To Echo Blu-Ray Earth To Echo DVD Earth vs The Spider DVD Edge of Tomorrow 2014 Blu-ray Edge Of Tomorrow Blu-Ray