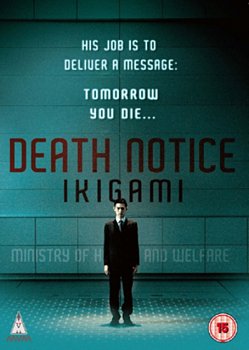 Anunta-ma cand pot comanda
Adauga in Wishlist
Descriere: Acest film nu are subtitrare in limba romana.
Japanese sci-fi drama based on the manga series by Motoro Mase. In the near future, the government has implemented a system in which certain people between the ages of 18 and 24 are eligible to be served with a 'death notice' informing them that they have just 24 hours to live - a policy thought to promote productivity and prosperity for society as a whole. Kengo Fujimoto (Shota Matsuda) is one of those recruited to hand out these death notices, or 'ikigami'. Although he vehemently opposes the law, Kengo is in no position to speak out against it and must continue to face the emotional devastation of his victims as he goes about his work.
Din aceeasi serie:
David Cronenbergs - Crimes of the Future / Steroe / Transfer / From the Drain Blu-Ray Dead Space - Aftermath Blu-Ray Dead Space - Downfall / Dead Space - Aftermath Blu-Ray Dead Space - Downfall / Dead Space Aftermath DVD Death Machine DVD Deathsport 1978 Blu-ray Deep Space DVD Defective 2017 DVD Deja Vu DVD Demolition Man Blu-Ray