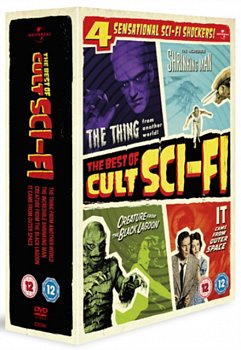 Anunta-ma cand pot comanda
Adauga in Wishlist
Descriere: Acest film nu are subtitrare in limba romana.
Collection of four classic sci-fi films. In 'The Incredible Shrinking Man' (1957) Scott Carey (Grant Williams) is enjoying a boating trip when his yacht passes through a mysterious cloud of radioactive mist. Returning home, Scott is shocked to discover that he is slowly shrinking. Before long, ordinary household objects become tools in his battle for survival against previously harmless pests like spiders and even his pet cat. Trapped in the basement of his house, Scott gradually prepares himself to face infinity as he shrinks into a sub-atomic world. In 'The Creature from the Black Lagoon' (1954) an expedition exploring the Amazon River discovers 'Gill Man': half man and half amphibian. Thought by the team to be the missing link in human evolution, the creature is captured and kept under observation. While in captivity it falls in love with the chief scientist (Richard Carlson)'s female assistant (Julie Adams), and embarks on a kidnapping attempt. In 'The Thing from Another World' (1951) an air force crew, led by Captain Henry (Kenneth Tobey), is dispatched from Alaska to investigate a high-impact crash in the Arctic wilderness. The team are shocked to find that the craft is a flying saucer and frantically try to extricate it from the ice. They use too much gelignite, however, and blow the thing to smithereens. Nearby a body is found and immediately covered with a blanket. Unfortunately, the blanket is electric, and brings back to life a murderous creation (James Arness) who proceeds to terrify the crew. In 'It Came from Outer Space' (1953) astronomer John Putnam (Carlson) and his fiancée, Ellen Fields (Barbara Rush), are intrigued by what appears to be a meteor in the night skies of Arizona. However, when the object crashes into the desert, Putnam becomes convinced that it is no natural phenomenon. The locals, led by Sheriff Matt Warren (Charles Drake), are distrustful and refuse to listen to his theories. However, when strange things start happening to the inhabitants of the town, even the most incredulous are forced to examine far-fetched explanations.
Din aceeasi serie:
Continuum DVD Cosmic Sin 2021 DVD Cowboys & Aliens - Extended Directors Cut Blu-Ray Cowboys & Aliens DVD Crimes Of The Future DVD Cyborg 1989 Blu-ray Daleks - Invasion Earth 2150 AD Blu-Ray Daleks - Invasion Earth 2150 AD DVD Daleks' Invasion Earth 2150 A.D. 1966 Blu-ray / 4K Ultra HD + Blu-ray (Collector's Edition) Daleks' Invasion Earth 2150 A.D. 1966 Blu-ray / 4K Ultra HD + Blu-ray (Steelbook)