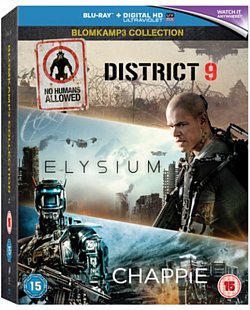 Anunta-ma cand pot comanda
Adauga in Wishlist
Descriere: Acest film nu are subtitrare in limba romana.
Collection of sci-fi films directed by Neill Blomkamp and starring Sharlto Copley. In 'Chappie' (2015), revolutionary scientist Deon (Dev Patel) awakens his latest creation, a robot with artificial intelligence and the ability to think and feel like a human. As the robot, Chappie (voice of Copley), begins to develop in the same ways a human would, society around him finds it increasingly difficult to accept him into their lives. After Chappie is kidnapped by South African gangsters who wish to do him harm, Deon puts all his efforts into finding his creation and proving to the world that Chappie is not dangerous but merely provides evidence of the next generation of thinking. 'District 9' (2009) is a feature based on the 2005 short film 'Alive in Jo'berg', about the tense relationship that exists between a group of aliens who have been living on earth for 30 years and the humans who have been trying to keep them segregated and under their control. The aliens live in a place called District 9 in South Africa in squalid conditions and are now under the supervision of Multi-National United (MNU), a company who are solely interested in exploiting the aliens' superior technology to make money. However, the only way of getting the extraterrestrial technology to work is by using alien DNA, so when MNU worker Wikus van der Merwe (Copley) accidentally becomes infected with the alien DNA, he suddenly finds that he is a very desirable commodity. Realising he is alone and in serious danger, and as relations between the aliens and humans intensify, Wikus must enter District 9 in order to escape. In 'Elysium' (2013), it is the year 2154 and the wealthy have fled the overpopulated and largely resource-drained Earth in favour of Elysium, a luxurious space habitat located in the planet's orbit. With no poverty, no sickness and no war, the contrast between Elysium and the ravaged planet it revolves around couldn't be starker, the idea of which is extremely tough to bear for those left on Earth. When Earth-bound Max De Costa (Damon) learns that he has no hope of beating his cancer, he decides his only option is to break into Elysium. With Secretary Delacourt (Foster) charged with enforcing Elysium's strict anti-immigration policies with a team of hardened troops at her disposal, led by the ferocious Agent Kruger (Copley), Max faces the battle of his life if he intends to bridge the cosmic gap between rich and poor.
Din aceeasi serie:
Chaos Walking 2021 Blu-ray / 4K Ultra HD + Blu-ray + Digital Download (Steelbook) Chaos Walking 2021 Blu-ray / with Digital Download Chaos Walking 2021 DVD Chappie Blu-Ray Chappie DVD Cherry 2000 Blu-Ray Children of Men 2006 Alt Blu-ray Children of Men 2006 Blu-ray Children Of Men DVD Chrysalis DVD