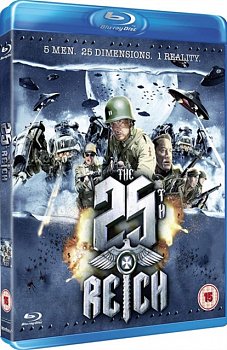 Livrare estimata pentru 13 Oct - 23 Oct
Adauga in cos
Adauga in Wishlist
Descriere: Acest film nu are subtitrare in limba romana.
Fast-paced action sci-fi in which a group of five US soldiers are sent back in time to foil Hitler's final efforts to triumph in World War II. It is 1944 and the Third Reich is on the verge of defeat. However, Hitler has one final weapon to deploy: a spaceship fleet capable of causing untold damage and allowing the Nazis to achieve their sought-after stranglehold on the world. Left with no option but to fight fire with fire, the United States prepares to deploy some cutting-edge technology of its own: a time machine that will allow a group of American GIs, which includes Captain Donald O'Brian (Jim Knobeloch) and Private Eli Ishbak (Dan Balcaban), to try and foil the plans at source. With so much riding on their efforts and the mind-bending possibilities of multiple dimensions opening up before them, will the men be able to cope with the pressure?
Din aceeasi serie:
2012 DVD 2029 DVD 2035 - Forbidden Dimensions DVD 2036 Origin Unknown 2018 DVD 2047 Virtual Reality DVD 25th Reich DVD 5th Passenger DVD A For Andromeda DVD A.I. 2001 Blu-ray Absolutely Anything DVD