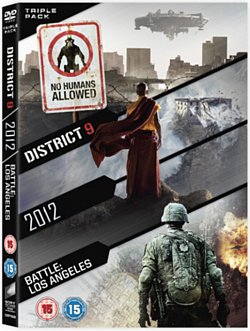 Anunta-ma cand pot comanda
Adauga in Wishlist
Descriere: Acest film nu are subtitrare in limba romana.
Triple bill of sci-fi thrillers in which the human race is threatened by alien invasions and cataclysms. In '2012' (2009) scientist Dr Adrian Helmsley (Chiwetel Ejiofor) is perturbed to discover that the Earth's core is heating up and that global disaster appears nigh, in line with the ancient Mayan calendar's prediction that the world will end on 21 December 2012. Helmsley informs President Wilson (Danny Glover) of what he has discovered and belated preparations are made to try and survive the cataclysm. As increasingly violent tsunamis, volcanic eruptions and typhoons begin to cause devastating destruction, Jackson Curtis (John Cusack), a divorced writer and researcher, draws on his knowledge of ancient writings to try and keep himself and a small group of survivors alive. In 'Battle - Los Angeles' (2011) the world finds itself under attack from aliens who follow a deadly meteor bombardment with an attempt at a ground invasion. Marine staff sergeant (Aaron Eckhart) is reassigned to a platoon sent on a special mission in an alien-occupied zone of Los Angeles. Led by 2nd Lt. Martinez (Ramon Rodriguez), the platoon find themselves making up the rules as they go along. Fighting against an unknown enemy, the troops must do whatever they can to defend themselves and their city. 'District 9' (2009) explores the tense relationship that exists between a group of aliens who have been living on Earth for 30 years and the humans who have been trying to keep them segregated and under their control. The aliens are contained in District 9 in South Africa, a squalid facility now under the supervision of Multi-National United (MNU), a company engaged in exploiting the superior technology of the aliens to make money. When MNU worker Wikus van der Merwe (Sharlto Copley) becomes infected with a DNA altering disease, giving him alien DNA, he realises that he is alone and in serious danger. There is only one place in which he can hope to survive: the discontented and dangerous District 9.
Din aceeasi serie:
2001 A Space Odyssey / Clockwork Orange / Shining / Full Metal Jacket DVD 2001 A Space Odyssey DVD 2012 / Terminator - Salvation / Children Of Men DVD 2012 2009 Blu-ray 2012 DVD 2029 DVD 2035 - Forbidden Dimensions DVD 2036 Origin Unknown 2018 DVD 2047 Virtual Reality DVD 25th Reich Blu-Ray