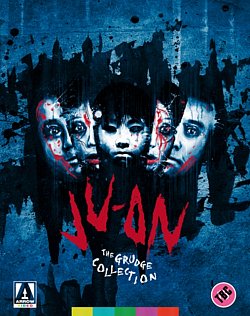 Livrare estimata pentru 10 Feb - 20 Feb
Adauga in cos
Adauga in Wishlist
Descriere: Acest film nu are subtitrare in limba romana.
Collection of six Japanese horror films from the 'Ju-on' series. In 'Ju-On: The Curse' (2000), school teacher Shunsuke Kobayashi (Yûrei Yanagi) makes a house call to check on his student Toshio Saeki (Ryota Koyama) after his repeated absences from school. In doing so he uncovers the horrific murder of Toshio's mother Kayako (Takako Fuji) within the Saeki household, a murder so violent that it induced a curse upon the house and all who enter it. In 'Ju-on: The Curse 2' (2000), which retells certain stories of the first film, a new family living in the house become afflicted with the curse. At the same time Tatsuya Suzuki (Makoto Ashikawa), a real estate agent, employs his psychic sister Kyoko (Yuko Daike) to help investigate the house, but in doing so they unwittingly bring the curse back to their family. In 'Ju-on: The Grudge' (2002), social worker Rika Nishina (Megumi Okina) is tasked with looking after the elderly Sachie Tokunaga (Chikako Isomura), who lives with her family at the cursed house. While there, Rika is shocked to find a young boy named Toshio (Yuya Ozeki) shortly before she witnesses Sachie's death, seemingly caused by a ghost. The following police investigation brings more people to the cursed house, allowing it to spread further than ever before. In 'Ju-on: The Grudge 2' (2003) Kyoko Harase (Noriko Sakai) is invited to join a TV production investigating rumours about the cursed household, and though they experience little in the way of paranormal events while filming, the team soon experiences their own horrors after being subjected to the curse. In 'Ju-on: Black Ghost' (2009), after school girl Fukie (Hana Matsumoto) is rushed to hospital following a collapse, she exhibits strange behaviour and is placed under supervision. When it is revealed that Fukie's behaviour is due to a strange cyst that may be the physical remnant of a merged twin, attempts to deal with the cyst soon unleash an evil spirit intent on revenge. Finally, in 'Ju-on: White Ghost' (2009), Atsushi Isobe (Tsuyoshi Muro) becomes possessed after moving to a new house, causing him to kill his entire family before hanging himself in the nearby forest. As he is dying, Atsushi records his final words onto a cassette, turning it into a cursed object that kills anyone who listens to it.
Din aceeasi serie:
Iconic Horror 5-film Collection 1990 DVD / Box Set It: 2-film Collection 2019 Blu-ray / 4K Ultra HD + Blu-ray (Boxset) Jason X 2002 DVD Jeepers Creepers 2001 Blu-ray Jeepers Creepers: Reborn 2022 Blu-ray Kwaidan - The Masters of Cinema Series 1965 Blu-ray Late Phases - Night of the Wolf 2014 Blu-ray Let The Right One In Blu-Ray Let The Right One In DVD Modern Monsters: 7-film Collection 2021 Blu-ray / Box Set