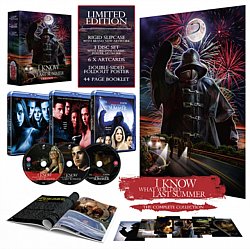 I Know What You Did Last Summer: Trilogy 2006 Blu-ray / Box Set (Limited Edition)

Anunta-ma cand pot comanda
Adauga in Wishlist
Descriere: Acest film nu are subtitrare in limba romana.
Triple bill of slasher horrors. In 'I Know What You Did Last Summer' (1997) teenage friends Julie (Jennifer Love Hewitt), Helen (Sarah Michelle Gellar), Ray (Freddie Prinze Jr) and Barry (Ryan Phillippe) get drunk and drive off in Barry's car while celebrating the end of high school. They quickly sober up when they collide with the body of a man in the road. Not wishing to be questioned by the police, they agree to dump the body in the sea. However, the man is still alive, so the foursome decide to finish the job they started and kill him. The friends agree not to mention what has occurred, and go their separate ways. However, a year later they are all being stalked and receiving messages from someone who knows what they did last summer, and wants revenge... In the sequel, 'I Still Know What You Did Last Summer' (1998), Julie is still traumatised by the brutal slayings of her friends last summer. She is also wracked with guilt over her role in the death of the fisherman, and her academic studies and personal life are suffering. When her best friend Karla Wilson (Brandy) wins a luxury holiday for four in the Bahamas, Julie thinks she can finally put the events of the last year behind her - but fate has other plans in store, as chaos and horror follow the teens across the paradise island. Finally, in 'I'll Always Know What You Did Last Summer' (2006), a group of teenagers cover up the death of one of their friends after a disastrous Fourth of July prank, then find themselves being stalked by a mysterious figure exactly one year later. As the teens are picked off one by one by the violent and inventive killer, they have to work out who the murderer is - and if he has any connection to their guilty secret.
Din aceeasi serie:
Hellraiser: Judgment 2018 Blu-ray Hellraiser: Judgment 2018 DVD Hellraiser: Revelations 2011 Blu-ray Host 2020 Blu-ray I Know What You Did Last Summer: Trilogy 2006 Blu-ray / Box Set Iconic Horror 5-film Collection 1990 Blu-ray / Box Set Iconic Horror 5-film Collection 1990 DVD / Box Set It: 2-film Collection 2019 Blu-ray / 4K Ultra HD + Blu-ray (Boxset) Jason X 2002 DVD Jeepers Creepers 2001 Blu-ray