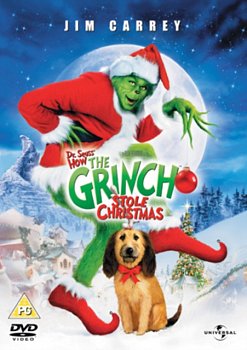 Livrare estimata pentru 09 Jun - 19 Jun
Adauga in cos
Adauga in Wishlist
Descriere: Acest film nu are subtitrare in limba romana.
Festive family comedy directed by Ron Howard. The Grinch (Jim Carrey) is a grouchy green monster who lives high up on a mountain overlooking the town of Whoville. The Grinch hates happiness, hates merriment, and most of all, hates Christmas. So one year, as the festive season approaches, he decides that enough is enough and draws up plans to steal all of the decorations and presents from the poor, unsuspecting citizens below. Does this mean the residents of Whoville won't be celebrating this year? Not if little Cindy Lou (Taylor Momsen) has anything to do with it.
Din aceeasi serie:
The Gnome-Mobile DVD The Goonies 1985 Blu-ray / 4K Ultra HD + Blu-ray The Goonies Blu-Ray The Goonies DVD The Grinch 2000 Blu-ray / 4K Ultra HD + Blu-ray The Horse Whisperer DVD The Incredible Journey DVD The Journey Home DVD The Journey Of Natty Gann DVD The Jungle Book (Live Action) / The Jungle Book (Animation) DVD