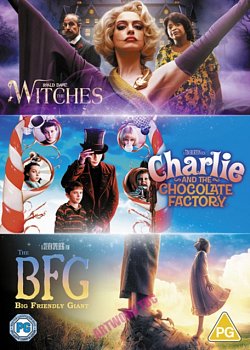 Livrare estimata pentru 19 Oct - 29 Oct
Adauga in cos
Adauga in Wishlist
Descriere: Acest film nu are subtitrare in limba romana.
Triple bill of family adventures based on the books by Roald Dahl. 'Charlie & the Chocolate Factory' (2005) centres around an eccentric chocolatier, Willy Wonka (Johnny Depp), and Charlie Bucket (Freddie Highmore), a good-hearted boy from a poor family who lives in the shadow of Wonka's extraordinary factory. One day Willy Wonka makes a momentous announcement: he will open up his famous factory and reveal all of its secrets and magic to five lucky children who find golden tickets hidden inside five randomly selected Wonka chocolate bars. When Charlie finds some money on the snowy street and takes it to the nearest store for a Wonka Whipple-Scrumptious Fudgemallow Delight he finds a golden ticket. The family decides that Grandpa Joe (David Kelly) should be the one to accompany Charlie on this once-in-a-lifetime adventure. Once inside, Charlie is dazzled by one amazing sight after another. 'The BFG' (2016) follows Sophie (Ruby Barnhill) as she is whisked away from her orphanage by the BFG (Mark Rylance) and taken to Giant Country where she is immediately at risk of being eaten by the other, larger giants, including Fleshlumpeater (Jemaine Clement) and Bloodbottler (Bill Hader). Together, Sophie and the BFG go on an adventure to Dream Country where they capture dreams for the BFG to give to all of the human world's sleeping children. After coming up with a cunning plan, the pair head back to London to see if the Queen (Penelope Wilton) can help them tackle the problem of the bullying, child-eating giants. Finally, in 'Roald Dahl's The Witches' (2020), while living with his grandmother, Agatha (Octavia Spencer), in 1950s Alabama, young orphan Charlie Hansen (Jahzir Bruno) stumbles upon a convention being held by a coven of witches, masquerading as the International Society for the Prevention of Cruelty to Children, at the Grand Orleans Imperial Island Hotel. When he is caught and turned into a mouse by the Grand High Witch (Anne Hathaway), however, Charlie and his grandmother must find a way to stop the witches' evil scheme to eliminate all of the world's children.
Din aceeasi serie:
R L Stines - Monsterville - The Cabinet Of Souls DVD R L Stines Mostly Ghostly 3 Doom House DVD Race To Witch Mountain DVD Return To Nims Island DVD Return To Oz DVD Roald Dahl's Classic Tales 1990 DVD / Box Set Rookie of the Year 1993 DVD Rudyard Kiplings - The Second Jungle Book Mowgli & Baloo DVD Santa Claus 2 DVD Santa Clause - The Movie Blu-Ray