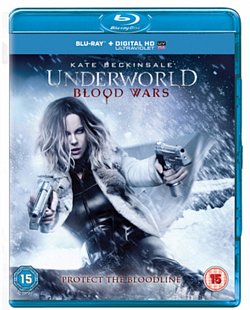 Livrare estimata pentru 10 Jun - 20 Jun
Adauga in cos
Adauga in Wishlist
Descriere: Acest film nu are subtitrare in limba romana.
Anna Foerster directs this action-horror, the latest instalment in the Underworld series, following Selene (Kate Beckinsale) as she is caught in the midst of the unending conflict between the Lycan and Vampire factions. The Lycans are preparing to mount a terrible and final war against the Vampires, intent on completely destroying them. At the head of this force there is an ambitious leader named Marius (Tobias Menzies) who intends to harvest the blood of Selene, a pure Vampire, to achieve unrivalled power. Selene and her allies must find a way to stop Marius if they are to have any chance of survival. To this end, Thomas (Charles Dance) sends Selene north to uncover a power that may save them from destruction, but time is running out, as the power her blood offers is desired by the Vampires too. The cast also features Theo James, Lara Pulver and Trent Garrett.
Din aceeasi serie:
Underworld - Rise Of The Lycans DVD Underworld DVD 2003 Underworld DVD 2003 Alt Underworld Movie Quadrilogy (4 Films) Blu-Ray Underworld Movie Quadrilogy (4 Films) DVD Valerian and the City of a Thousand Planets 2016 Blu-ray / 3D Edition with 2D Edition Valerian And The City Of A Thousand Planets 4K Ultra HD 2016 Valerian And The City Of A Thousand Planets DVD Valhalla: Legend of Thor 2019 DVD Vampire Academy DVD