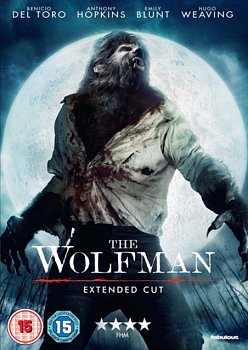 Livrare estimata pentru 21 Feb - 03 Mar
Adauga in cos
Adauga in Wishlist
Descriere: Acest film nu are subtitrare in limba romana.
Remake of the 1941 horror film of the same name set in the 1880s. Benicio Del Toro stars as Lawrence Talbot, a gentleman tormented by the death of his mother and subsequent end of his childhood, who leaves home to try and rid himself of the memories and hurt. However, years later he is contacted by his brother's fiancee, Gwen Conliffe (Emily Blunt), who tells of how her love has gone missing, leading Talbot to return home in order to help with the search. Upon his arrival, however, he discovers that something horrifyingly strong with a seemingly unquenchable thirst for blood has been terrorising the villagers. With the death toll rising, a very suspicious Inspector Aberline (Hugo Weaving) from Scotland Yard is on the case. As he begins to uncover the truth, he hears about a curse that transforms the affected into a werewolf under the full moon... The film won the 2011 Academy Award for Best Makeup.
Din aceeasi serie:
The Twilight Saga: The Complete Collection 2012 DVD / Box Set (New) The Ultimate Movie Shark Collection (5 Films) DVD The Vampire Diaries: The Complete Third Season 2012 Blu-ray / Box Set The Water Horse - Legend Of The Deep Blu-Ray The Water Horse - Legend Of The Deep DVD The Wolverine Blu-Ray 2013 Alt The Wolverine DVD Thor - Legends Of Vahallah DVD Thor - Tales Of Asgard DVD Thor - The Dark World 3D+2D Blu-Ray