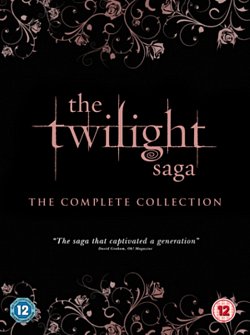 Collection of all five films of the teen vampire saga based on the bestselling novels by Stephenie Meyer. In 'Twilight' (2008), Bella Swan (Kristen Stewart) moves to the small town of Forks to live with her father and meets the mysterious and beautiful Edward Cullen (Robert Pattinson). The two grow close and become soulmates - but there's just one small problem: Edward is a 90-year-old vampire with irrepressible bloodthirsty urges. Can the couple's deep and passionate love overcome the frenzied vampires and werewolves that stand in their way - not to mention the disapproval of Bella's family and friends? In 'New Moon' (2009), following her ill-fated 18th birthday party, Bella is devastated by the abrupt departure of her vampire lover Edward and his family - but finds solace in a deepening relationship with her childhood friend, the irresistible Jacob Black (Taylor Lautner), a member of the mysterious Quileute tribe. Bella's loyalties are tested to the limit as she becomes entangled in a dark and deadly supernatural secret. In 'Eclipse' (2010), Bella is reunited with Edward, but their forbidden relationship comes under threat once again as vampire villainess Victoria (Bryce Dallas Howard) continues to seek her revenge. Meanwhile, with graduation fast approaching, Bella is forced to choose once and for all between her love for Edward and her strong friendship with Jacob - a decision with the potential to inflame the centuries-long conflict between vampire and werewolf. In 'Breaking Dawn: Part 1' (2011), the newfound marital bliss of Bella and Edward comes under threat when Bella discovers that she is pregnant. Posing a threat both to the Quileute wolves and to the Volturi vampires, the conception and near-fatal birth of their daughter sparks a series of dramatic events that threatens to tear their world apart. In 'Breaking Dawn: Part Two' (2012), after Bella is turned into a vampire by Edward she appears to be enjoying her new immortal life and the abilities bestowed upon her. But after Irina (Maggie Grace) mistakes Bella and Edward's child, Renesmee (Mackenzie Foy), for an 'immortal child' and tells the Volturi this, they vow to destroy the potentially threatening girl and the whole Cullen family for allowing her to be transformed. In order to protect themselves and Renesmee, the Cullen clan must then enlist the help of other vampire clans around the world in the hope of convincing the Volturi of the false claims of Irina.