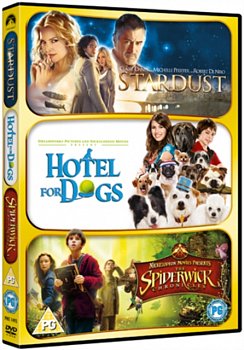 Livrare estimata pentru 11 Jun - 21 Jun
Adauga in cos
Adauga in Wishlist
Descriere: Acest film nu are subtitrare in limba romana.
Triple bill of light-hearted adventures. In 'Stardust' (2007) Tristan (Charlie Cox) tries to win the heart of a beautiful but cold girl, Victoria (Sienna Miller), by going on a quest to retrieve a fallen star. His journey takes him to a mysterious and forbidden land where he discovers that he is far from the only one seeking the star. The four sons of the ruling king (Peter O'Toole) and the ghosts of their three dead brothers all need the star as they vie for the throne, while the evil witch, Lamia (Michelle Pfeiffer), wants to use its powers to make herself young again. Can Tristan overcome the odds and claim the star? 'Hotel for Dogs' (2009) follows the fortunes of a pair of orphans, Andi (Emma Roberts) and Bruce (Jake T. Austin), who arrive at a foster home with a 'strictly no pets' policy and realise they'll have to find a home for their dog, Friday. On a trip downtown, the kids discover a disused hotel that would be ideal for their purposes. When they discover some of the local strays have already made it their home, they decide to take things one step further and turn the hotel into a refuge for every stray mutt they can find. But will the powers that be let the children keep the hotel running? 'The Spiderwick Chronicles' (2009) follows the lives of twin brothers, Jared (Freddie Highmore) and Simon (also Highmore), who begin to experience strange things when they move into their great uncle (David Strathairn)'s run-down old house. Unable to rationally explain the unusual disturbances that seem to be occurring, the older members of the family blame Jared. Determined to prove his innocence, Jared enlists the help of his sibling in investigating the mystery of the Spiderwick Estate and the magical creatures that inhabit it.
Din aceeasi serie:
Spiderman 3 DVD SSSSSSS Blu-Ray + DVD Stardust - Special Edition Blu-Ray Stardust / Ondine DVD Stardust DVD Strings DVD Sucker Punch Blu-Ray Sucker Punch DVD Suicide Squad - Extended Cut Blu-Ray Suicide Squad - Hell To Pay Blu-Ray