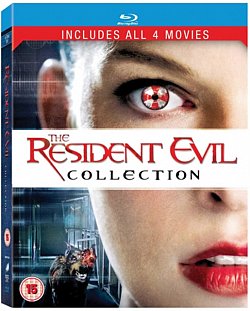 Anunta-ma cand pot comanda
Adauga in Wishlist
Descriere: Acest film nu are subtitrare in limba romana.
Box set of action films based on the popular computer game. In 'Resident Evil' (2002), a virus has been sealed in an underground research centre, the Hive, and Alice (Milla Jovovich) and Rain (Michelle Rodriguez) are sent in with a team of commandos to destroy it. However, they have not counted on the fact that all the employees who were trapped in the Hive with the virus, and thought to be dead, have been turned into the living dead and one scratch from them can cause the recipient to become like them... In 'Resident Evil: Apocalypse' (2004), Alice finds herself stuck in the contaminated Raccoon City after the deadly re-opening of the Hive. The infamous Umbrella Corporation has banned anyone from leaving in case of possible infection with the outside world. Along with other survivors Jill Valentine (Sienna Guillory) and Carlos Oliviera (Oded Fehr), Alice must fight for her survival - and do all she can to escape the nightmare necropolis. Together, the small band of survivors seeks out eminent scientist Dr Charles Ashford (Jared Harris), the only man with the knowledge to help them out of their awful entrapment - but they soon discover that Ashford's co-operation comes at a heavy price. In the third film, 'Resident Evil: Extinction' (2007), Alice, alone now years after the Raccoon City disaster, is aware that she has become a liability and likely to endanger those around her. She is struggling to survive and bring down the Umbrella Corporation led by the sinister Albert Wesker (Jason O'Mara) and head researcher Dr. Isaacs (Iain Glen). Meanwhile, travelling through the Nevada Desert and the ruins of Las Vegas, Carlos Olivera (Fehr), L.J. (Mike Epps), and new survivors K-Mart (Spencer Locke), Claire Redfield (Ali Larter), and Betty (Ashanti) are fighting to survive against hordes of zombies, killer crows and other terrible creatures spawned by the deadly T-Virus that has killed millions. Finally, in 'Resident Evil: Afterlife' (2010), Alice continues her fight against the Umbrella Corporation. Following new information, she heads to Los Angeles where she seeks out any survivors of the T-virus epidemic. Characters Jill Valentine (Guillory) and Claire Redfield (Ali Larter), who appeared previously in the series, are back to help defeat the Undead. The group of survivors attempt to strengthen their numbers and find refuge, but can they escape the city which is invested with zombies?
Din aceeasi serie:
Resident Evil - Extinction DVD Resident Evil - The Complete Collection (6 Movies) Blu-Ray Resident Evil - The Complete Collection DVD Resident Evil - Vendetta DVD Resident Evil 2002 Blu-ray / 4K Ultra HD + Blu-ray Resident Evil: 1-4 Collection 2010 DVD / Box Set Resident Evil: Afterlife 2010 Blu-ray / 4K Ultra HD + Blu-ray Resident Evil: Apocalypse 2004 Blu-ray / 4K Ultra HD + Blu-ray Resident Evil: Damnation 2012 DVD / with UltraViolet Copy Resident Evil: Extinction 2007 Blu-ray / 4K Ultra HD + Blu-ray