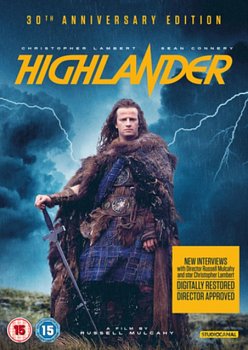 Livrare estimata pentru 18 Feb - 28 Feb
Adauga in cos
Adauga in Wishlist
Descriere: Acest film nu are subtitrare in limba romana.
Connor McCloud (Christopher Lambert) is a Scotsman from the Middle Ages who discovers that he cannot be killed in battle. Cast out by his clan, who believe him to be a witch, he is befriended by another Immortal, Ramirez (Sean Connery), who teaches him of the Gathering, a magical event which can be experienced by one of their kind when all the others are slain. Immortals can only be killed by being beheaded, and in the Twentieth century McCloud has only one Immortal left to face in battle - the evil Kurgan.
Din aceeasi serie:
High Spirits 1988 Blu-ray High Spirits 1988 DVD Highlander 1986 Blu-ray / 4K Ultra HD + Blu-ray (Collector's Edition) Highlander 4K Ultra HD + Blu-Ray Highlander Blu-Ray Highlander: Endgame 2000 Blu-ray Highlander: Endgame 2000 DVD Hocus Pocus 1993 Blu-ray / 4K Ultra HD + Blu-ray Hocus Pocus Blu-Ray Hocus Pocus DVD