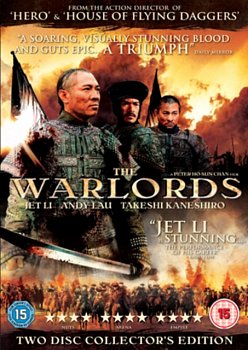 Livrare estimata pentru 11 Jul - 21 Jul
Adauga in cos
Adauga in Wishlist
Descriere: Acest film nu are subtitrare in limba romana.
Lavish historical action film telling the story of a trio of warriors in the era of the Qing Dynasty - General Ma Xinyi (Jet Li), Cao Er-Hu (Andy Lau) and Zhang Wen-Xiang (Takeshi Kaneshiro) - who make a pact of brotherhood to one another vowing that anyone who harms one of the brothers will be killed. When the country is plunged into chaos and political upheaval following the Taiping Rebellion, the three blood brothers must struggle to maintain their loyalty as war rages around them.
Din aceeasi serie:
The Tiger An Old Hunters Tale DVD The Treatment DVD The Violin Teacher DVD The Wailing DVD The Wait DVD The Warlords Blu-Ray The Warlords DVD Alt The Warlords DVD New The Warrior And The Wolf Blu-Ray The Water Margin Series 1 to 2 Complete Collection DVD