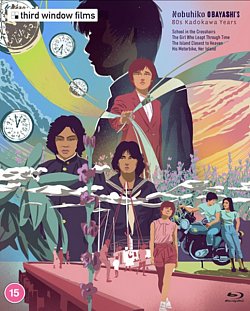 Livrare estimata pentru 20 Dec - 30 Dec
Adauga in cos
Adauga in Wishlist
Descriere: Acest film nu are subtitrare in limba romana.
Collection of four features directed by Nobuhiko Obayashi. In 'School in the Crosshairs' (1981) shy student Yuka Mitamura (Hiroko Yakushimaru) has psychic powers. She must use them to stop a new student with similar powers who is using them for ill, but there is a darker force at work that Yuka must defeat. 'The Girl Who Leapt Through Time' (1983) stars Tomoyo Harada as Kazuko Yoshiyama, a high school student who gains the ability to time travel and is stuck repeating tomorrow. In 'The Island Closest to Heaven' (1984) Harada again stars as Mari Katsuragi, a girl desperate to visit New Caledonia because her late father promised her that one day they would visit the island closest to heaven together. Finally, in 'His Motorbike, Her Island' (1986) biker Koh Hashimoto (Riki Takeuchi) meets Miyoko Shiraishi (Kiwako Harada) while riding through her hometown and teaches her to ride a motorcycle.
Din aceeasi serie:
Next Time I’ll Aim For The Heart DVD Night And Fog In Japan DVD Nikita Blu-Ray Nikita DVD No Blood No Tears DVD Oddsockeaters DVD Once Upon A Time - In China 2 DVD Ong Bak DVD Osamu Tezukas Metropolis - Limited Edition Blu-Ray + DVD Painless DVD