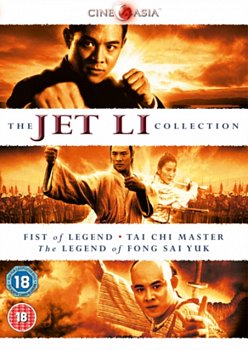 Livrare estimata pentru 09 Jul - 19 Jul
Adauga in cos
Adauga in Wishlist
Descriere: Acest film nu are subtitrare in limba romana.
Triple bill of action features starring Jet Li. In 'Fist of Legend' (1994) Li plays a young Chinese martial arts student, Chen Zhen, who braves racial insults at college in Kyoto, incited by his love for local girl Mitsoko Yamada (Nakayama Shinobu). The situation isn't much better when Chen returns to the Japanese-occupied Shangai and finds his master, Hou Ting-An (Siu-hou Chin), murdered. Having been tipped over the edge, Chen sets out to avenge his master. In 'Tai Chi Master' (1993) Li plays Junbao, whose lifelong friendship with Tienbao (Siu-hou Chin) is tested to its limits when Tienbao becomes a follower of the ruling military regime. Junbao joins a group of military rebels instead, but when Tienbao betrays the rebels and Junbao, it becomes clear that the old friends will have to confront each other directly, whatever the cost. In 'The Legend of Fong Sai Yuk' (1993) Fong Sai Yuk (Li) falls in love with the beautiful Ting-Ting (Michelle Reis). There is a problem, however: her father has decreed that only the winner of a martial arts competition staged by him will have the right to marry his daughter. Matters are complicated further by the fact that Fong's father, Fong Tak (Paul Chu), is identified by the ruling dictatorship as a subversive influence. Fong may have to put his martial arts skills to use to rescue him.
Din aceeasi serie:
Ip Man 2008 DVD / Ultimate Edition Ip Man 3 DVD Ip Man 4 2019 Blu-ray Ip Man 4 2019 DVD Ironheart Blu-Ray Julias Eyes Blu-Ray Julias Eyes DVD Kakera - A Piece Of Our Life DVD Kamui - The Lone Ninja DVD Kids Return Blu-Ray