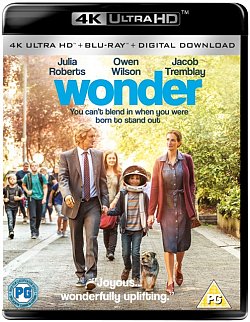 Anunta-ma cand pot comanda
Adauga in Wishlist
Descriere: Acest film nu are subtitrare in limba romana.
Julia Roberts and Owen Wilson star in this drama directed by Stephen Chbosky. Based on R.J. Palacio's novel of the same name, the film follows Auggie Pullman (Jacob Tremblay), a young boy with a rare facial deformity, who attempts to fit in at a new school with the help of his parents Isabel (Roberts) and Nate (Wilson). After previously being unable to attend mainstream school due to frequent hospital visits to treat his condition, Auggie is enrolled in the fifth grade at a private school in New York. However, with fellow students and the larger school community finding it hard to accept him, Auggie and his family face a struggle as he bravely attempts to overcome adversity and show everyone he is just like them.
Din aceeasi serie:
Wild Bill Blu-Ray Willie Dynamite Blu-Ray Wolf 2021 Blu-ray Woman at War 2018 Blu-ray Woman In Gold Blu-Ray Wonder Blu-Ray Wonderstruck Blu-Ray Yesterday 2019 Blu-ray Zoology Blu-Ray