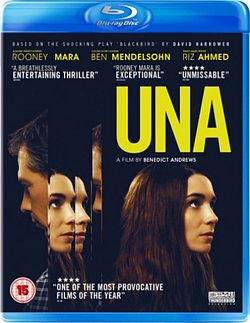 Livrare estimata pentru 21 Feb - 03 Mar
Adauga in cos
Adauga in Wishlist
Descriere: Acest film nu are subtitrare in limba romana.
Rooney Mara and Ben Mendelsohn star in this drama adapted from the play by David Harrower. Having been left devastated as a 13-year-old when her abusive relationship with then thirty-something Ray Brooks (Mendelsohn) suddenly came to an end, Una Spencer (Mara) decides to track her ex-lover down some 15 years later. Now with a new identity, new job and a new wife, Ray has done all he can to forget his past crimes and move on. However, his new life is shattered when Una turns up at his work to confront him, looking to finally get some answers to the questions which have haunted her for her entire adult life.
Din aceeasi serie:
Travelers Season Two Blu-Ray Trumbo Blu-Ray Tucker - The Man and his Dream Blu-Ray Twin Peaks: Fire Walk With Me - The Criterion Collection 1991 Blu-ray Two Lovers 2008 Blu-ray Under Milk Wood Blu-Ray Under the Silver Lake 2018 Blu-ray United Blu-Ray Upstream Colour Blu-Ray Vice 2019 Blu-ray