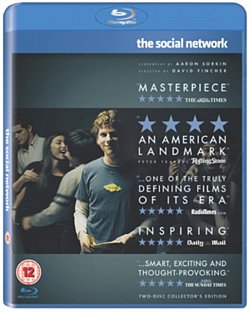 Livrare estimata pentru 07 Jun - 17 Jun
Adauga in cos
Adauga in Wishlist
Descriere: Acest film nu are subtitrare in limba romana.
Directed by David Fincher, this award-winning drama is based on the story of the creation of Facebook. Jesse Eisenberg plays Mark Zuckerberg who, in 2003, developed the social networking site while he was an undergraduate at Harvard. Six years later Zuckerberg is a millionaire but his success is proving to be problematic to his personal life and he finds himself undergoing multiple legal battles. Justin Timberlake also stars as Sean Parker, the co-founder of Napster. The film won three Golden Globe awards, three Academy Awards and Fincher won the 2011 BAFTA for Achievement in Direction.
Din aceeasi serie:
The River Blu-ray The Rum Diary Blu-Ray The Seagull Blu-Ray The Sense Of An Ending Blu-Ray The Shout Blu-Ray The Social Network Blu-Ray The Space Between Us Blu-Ray The Sun Also Rises Blu-Ray The Switch Blu-Ray The Taste of Tea 2004 Blu-ray