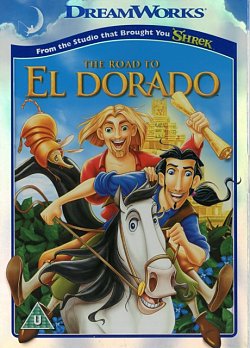 Livrare estimata pentru 11 Jul - 21 Jul
Adauga in cos
Adauga in Wishlist
Descriere: Acest film nu are subtitrare in limba romana.
Eric Bergeron and Don Michael Paul direct this animation featuring the voice talents of Kevin Kline and Kenneth Branagh. When luckless Spanish adventurers Tulio and Miguel (voices of Kline and Branagh) obtain a map showing the way to El Dorado, the legendary city of gold, they immediately set sail for Mexico and the adventure of a lifetime. After a perilous sea voyage, they reach their destination and are lavished with more gold than they ever dreamed of. Their excitement is short-lived, however, when they learn that the people of El Dorado are in danger, and Tulio and Miguel must decide what matters to them most - their wealth or their newfound friends. The film features music by Elton John, Tim Rice and Hans Zimmer, the Oscar-winning team behind 'The Lion King' (1994).
Din aceeasi serie:
The Remains Of The Day - Anniversary Edition Blu-Ray The Rider Blu-Ray The Right Stuff Blu-Ray The Riot Club Blu-Ray The River Blu-ray The Rum Diary Blu-Ray The Seagull Blu-Ray The Sense Of An Ending Blu-Ray The Shout Blu-Ray The Social Network 2010 Blu-ray