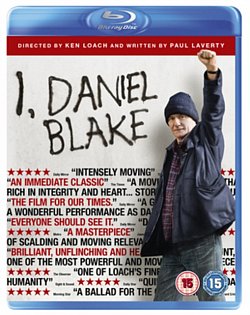 Livrare estimata pentru 21 Feb - 03 Mar
Adauga in cos
Adauga in Wishlist
Descriere: Acest film nu are subtitrare in limba romana.
Ken Loach directs this drama that follows a 59-year-old joiner as he tries to navigate the British benefits system. In the North-East of England, widower Daniel Blake (Dave Johns) is forced to stop working when he is taken ill with heart disease and so applies for Employment and Support Allowance from the Government. But his life is further thrown into disarray when his benefits are suddenly taken away from him and he is forced to jump through the many hoops of the bureaucratic system to get them back. During this time, he meets the similarly-troubled single mother Katie (Hayley Squires) whose financial problems mean she is being forced out of her home in London along with her two kids Dylan and Daisy (Dylan McKiernan and Briana Shann). The film was nominated for five BAFTAs including Best Film, Best Director (Loach), Best Original Screenplay and Best Supporting Actress (Squires) and won the award for Outstanding British Film of the Year.
Din aceeasi serie:
Holiday 2018 Blu-ray / Limited Edition Holmes and Watson 2018 Blu-ray Hotel Mumbai 2018 Blu-ray Hustlers 2019 Blu-ray Hyde Park On Hudson Blu-Ray I Tonya Blu-Ray If Beale Street Could Talk 2019 Blu-ray In The Heat Of The Night Blu-Ray In the House 2012 Blu-ray In the Mood for Love - The Criterion Collection 2000 Blu-ray / Restored