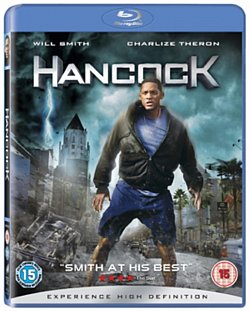 Livrare estimata pentru 11 Jul - 21 Jul
Adauga in cos
Adauga in Wishlist
Descriere: Acest film nu are subtitrare in limba romana.
Action comedy starring Will Smith. John Hancock (Smith) is a conflicted, alcoholic superhero whose heroics have saved many lives. Unfortunately, the damage he always leaves in his wake has caused him to lose the support of the public. When Hancock saves the life of PR executive, Ray Embrey (Jason Bateman), Ray makes it his mission to change Hancock's image and help him regain the support of the people. Hancock grudgingly accepts and Ray convinces him to turn himself into the authorities who subsequently imprison him for his lawless behaviour. As the crime rate begins to increase, the people of Los Angeles realise just how important Hancock was to the safety of the city. With his reputation restored, everything seems right again... until Hancock meets Ray's wife (Charlize Theron), a woman with similar powers to his own, who may hold the key to his secret past.
Din aceeasi serie:
Goodbye To Language (Aka Adieu Au Langage) 3D+2D Blu-Ray Grace Of Monaco Blu-Ray Greed 2019 Blu-ray Green Book 2019 Blu-ray Hachi - A Dogs Tale Blu-Ray Hangman Blu-Ray Hawking Blu-Ray Her Blu-Ray Hidden Figures Blu-Ray Hiding Blu-Ray