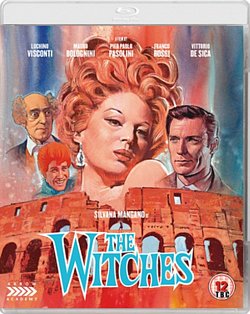 Anunta-ma cand pot comanda
Adauga in Wishlist
Descriere: Acest film nu are subtitrare in limba romana.
Italian anthology film featuring five short stories from directors Mauro Bolognini, Vittorio De Sica, Pier Paolo Pasolini, Franco Rossi and Luchino Visconti. 'The Witch Burned Alive' follows a famous actress as she spends an evening with friends at a chalet in the Alps. In 'Civic Sense' a man is injured in a road accident. 'The Earth As Seen from the Moon' follows a widowed man as he searches for a new wife. In 'The Sicilian Belle' a man confronts those who wronged his daughter. Finally, 'An Evening Like the Others' follows a man as he attempts to reconcile with his disillusioned wife.
Din aceeasi serie:
The Ugly Truth 2009 Blu-ray The Very Best Of Laurel & Hardy Film Collection Blu-Ray The War Of The Roses Blu-Ray The Way, Way Back 2013 Blu-ray The Wedding Video Blu-Ray The Women Blu-Ray The Worlds End Blu-Ray The Young Offenders 2016 DVD There Was A Crooked Man Blu-Ray This Is 40 Blu-Ray