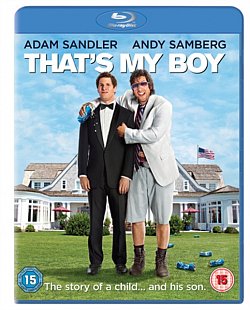 Livrare estimata pentru 17 Dec - 27 Dec
Adauga in cos
Adauga in Wishlist
Descriere: Acest film nu are subtitrare in limba romana.
Adam Sandler stars in this comedy as an absent father who re-enters the life of his estranged son in an attempt to sting him for cash. Donny, a foul-mouthed, hedonistic middle-aged playboy who is facing a jail sentence for tax evasion, finds out that Todd (Andy Samberg), the son he fathered as a teenager with his high school teacher, is now a hedge fund manager and about to tie the knot with his fiancée (Leighton Meester). Donny instantly sees an opportunity to get hold of the cash he needs to bail him out of jail, and turns up at Todd's door the day before his wedding, sending his son's well-ordered life spinning into chaos.
Din aceeasi serie:
Ted 2 2015 Blu-ray Ted 2 Blu-Ray Ted 2011 Blu-ray Ted Blu-Ray + Plus Thunder Buddies T-Shirt Ted/Ted 2 2015 Blu-ray / Box Set The 40 Year-old Virgin 2005 Blu-ray The Adventures Of Priscilla - Queen Of The Desert Blu-Ray The American President Blu-Ray The Angels' Share 2012 Blu-ray The Apartment Blu-Ray