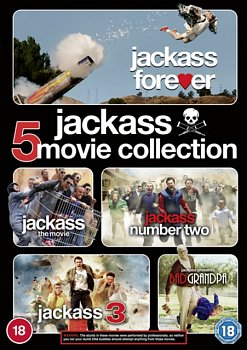 Livrare estimata pentru 22 Aug - 01 Sep
Adauga in cos
Adauga in Wishlist
Descriere: Acest film nu are subtitrare in limba romana.
Collection of five films in the Jackass franchise, in which Johnny Knoxville and friends perform a variety of crazy and dangerous stunts. 'Jackass: The Movie' (2002) sees the boys having fun and games with golf carts, urine soaked snow cones and self-inflicted paper cuts. Series regulars Steve-O, Dave England, Chris Pontius and Jason Acuna all make an appearance. The original crew returns in 'Jackass: Number 2 Uncut' (2006), pushing the limit of what is morally acceptable to commit even further. More cringe-worthy stunts, more nasty spills, more stupid pranks than even the first movie. As well as their native US the crew also takes the camera to Australia, India and Moscow in its search for new ways to gross out an audience. 'Jackass 3' (2010) sees another onslaught of insane and painful pranks. Bull riding, a paintball shootout, rocket jet-skiing and bungee jumping while strapped to a toilet are just some of the pranks the boys get up to this time round, as well as 'the worst wake-up in the world', in which Bam Margera wakes up his sleeping friend in the most brutal and disgusting ways he can dream up. In 'Jackass Presents: Bad Grandpa' (2013, Knoxville reprises his 'Bad Grandpa' role from the show for a one-off narrative-driven feature directed by long-time collaborator Jeff Tremaine. 86-year-old Irving Zisman (Knoxville) takes his grandson Billy (Jackson Nicoll) on a road trip across the United States to reunite him with his father. Along the way, the trouble-making duo enter a children's beauty pageant and visit a funeral home while unleashing a bevy of pranks on an unsuspecting public. Finally, 'Jackass Forever' (2022) sees the crew return to their roots as they take part in a series of dangerous stunts and painful pranks.
Din aceeasi serie:
Instant Family 2019 Blu-ray It's Complicated 2009 Blu-ray Its A Lot Blu-Ray Jack And Jill 2011 Blu-Ray / with UltraViolet Copy Jack and the Beanstalk - After Ever After 2020 DVD Johnny English - Reborn Blu-Ray Johnny English / Johnny English - Reborn Blu-Ray Johnny English 2003 Blu-ray Johnny English Strikes Again 2018 Blu-ray Johnny English Strikes Again 4K Ultra HD