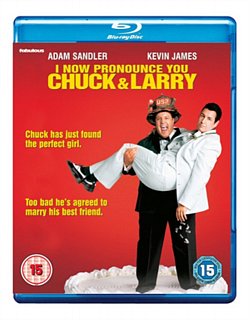 I Now Pronounce You Chuck and Larry 2007 Blu-ray

Livrare estimata pentru 14 Oct - 24 Oct
Adauga in cos
Adauga in Wishlist
Descriere: Acest film nu are subtitrare in limba romana.
Buddy movie taken to extremes. New York firefighters Chuck Levine (Adam Sandler) and Larry Valentine (Kevin James) live different lives. Whilst Chuck is a self-confessed lothario out for a good time, Larry is a widower struggling to keep a regular home life for the sake of his two young children. With Larry refusing to take up life as a single parent and deal with his loss, he forgets to change the primary beneficiary of his pension from his wife to his children before the cut-off date, which would financially protect them in the event of a work injury. The only solution is to get married again, but Larry decides there's no other woman he could trust enough with his children's future. During a routine search of a burning house, Larry saves Chuck's life in an accident and Chuck is forever indebted to his best mate as they awake in hospital. Evaluating his predicament whilst in his sick bed, Larry finds an article about a same-sex domestic partnership and realises Chuck could pay his debt quicker than anticipated! After wearing Chuck down, they eventually get hitched in a bizarre Las Vegas wedding chapel and just when they settle in to a scene of same-sex domestic bliss for the sake of the kids, they soon realise that their gay union is going to be under serious scrutiny from surprise inspector Clinton Fitzer (Steve Buscemi), who is always ready to catch out straight guys cheating the system.
Din aceeasi serie:
Hue & Cry Blu-Ray I Don’t Know How She Does It Blu-Ray I Feel Pretty Blu-Ray I Give It A Year Blu-Ray I Hate Valentines Day Blu-Ray I Sell The Dead Blu-Ray I Wanna Hold Your Hand Blu-Ray I’m Alright Jack Blu-Ray I’m Gonna Git You Sucka Blu-Ray I’m So Excited Blu-Ray