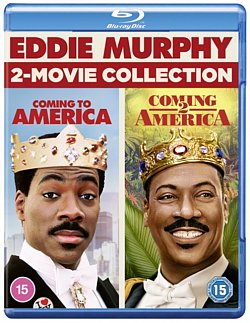 Livrare estimata pentru 09 Jun - 19 Jun
Adauga in cos
Adauga in Wishlist
Descriere: Acest film nu are subtitrare in limba romana.
Double bill of American comedies starring Eddie Murphy. In 'Coming to America' (1988) African prince Akeem (Murphy) is dissatisfied with his luxurious life and unimpressed with the subservient bride his parents have chosen for him. So, along with his faithful best friend Semmi (Arsenio Hall), he travels to New York City with hopes of finding the woman of his dreams. When he arrives, he takes a job in a burger bar, hoping to meet someone who will love him for himself and not his money. But despite his eagerness to learn the customs of this strange new land, the comic culture shocks keep coming thick and fast. In the sequel 'Coming 2 America' (2021), 30 years after he first visited New York City, Akeem discovers he has a long-lost American son who will soon become heir to the throne of Zamunda. As tradition dictates, Akeem, once again accompanied by his best friend Semmi, returns to the borough of Queens in search of his illegitimate offspring in order to safeguard the future of his kingdom.
Din aceeasi serie:
Cockneys vs Zombies Blu-Ray Comfort And Joy Blu-Ray Coming 2 America 2020 Blu-ray Coming to America 1988 Blu-ray Coming to America 1988 Blu-ray / 4K Ultra HD + Blu-ray Confessions Of A Shopaholic Blu-Ray Crazy Rich Asians 2018 Blu-ray / 4K Ultra HD + Blu-ray + Digital Download Crazy Rich Asians Blu-Ray Crazy Stupid Love Blu-Ray Date Night 2010 Blu-ray Alt