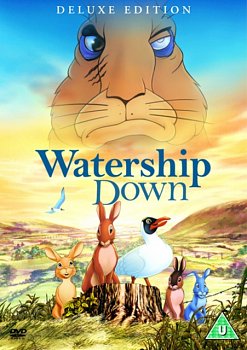 Animated feature of Richard Adams' best-selling novel. When rabbit Fiver (voiced by Richard Briers) has a premonition of his warren being destroyed by man, he persuades his brother Hazel (John Hurt) and a few other friends to flee in search of safety. They have many adventures along the way, until they encounter a vicious race of rabbits who are determined to prove their supremacy.