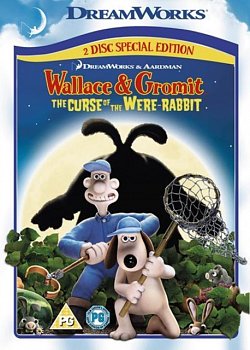 Wallace and Gromit: The Curse of the Were-rabbit 2005 DVD / Special Edition

Oscar-winning animated feature, starring the cheese-loving inventor Wallace (voice of Peter Sallis) and his long-suffering dog Gromit. In the run up to the village's annual vegetable growing competition, Wallace and Gromit set up their Anti-Pesto pest control company to make sure no hungry rabbits get their hands on the prize exhibits. But after clearing the rabbits from the grounds belonging to Lady Tottingham (Helena Bonham Carter), and crossing swords with the gun-obsessed Victor Quatermaine (Ralph Fiennes), something sinister is soon afoot - a giant rabbit that only appears during the full moon, which is laying waste to the village's vegetables. Can Wallace and Gromit stop the were-rabbit before it's too late, and, more importantly, can Wallace win the hand of Lady Tottingham before she is swept off her feet by Victor Quatermaine?