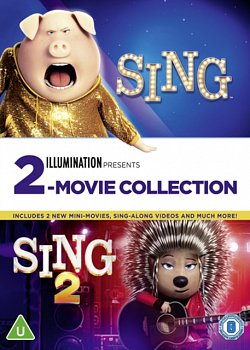 Garth Jennings directs this double bill of animated features with an all-star voice cast including Matthew McConaughey, Reese Witherspoon and Seth MacFarlane. In 'Sing' (2016) Buster Moon (McConaughey) is the highly optimistic koala proprietor of a venerable theatre. But as the splendour of his theatre begins to fade and Buster's life ambition with it, he must quickly devise a way to save his playhouse. Despite the reservations of his sheep friend Eddie (John C. Reilly), Buster decides to hold a singing contest in the hopes of raising enough money and attention to save his ailing theatre. With most of the town signing up to take part, the most promising contestants are Rosita (Witherspoon), an overworked pig housewife, Mike (MacFarlane), an arrogant, larger-than-life mouse, Ashley (Scarlett Johansson), a punk-rock porcupine, Meena (Tori Kelly), a stage-frightened elephant, and Johnny (Taron Egerton), a British gorilla pressured by his father's criminal exploits. How will they fare? And will Buster be able to save his theatre? In 'Sing 2' (2021) Buster is happy and thriving at his new theatre. Reuniting with the old gang, they travel to the city to audition for entertainment mogul Jimmy Crystal (Bobby Cannavale). Unimpressed with their audition, Gunter (Nick Kroll) panics and promises Jimmy former rocker Clay Calloway (Bono) and Jimmy is convinced. There is just one problem - nobody has seen Clay Calloway in 15 years... Can the team band together to put on the show?