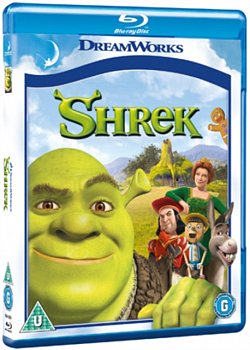 Animated comedy based on the book by William Steig. Shrek (voice of Mike Myers) is a reclusive ogre living in a swamp on the edges of a fairytale kingdom. The vain yet diminutive ruler of the land, Prince Fahrquaad (John Lithgow), decides to streamline his kingdom by getting rid of all the fairytale characters who promptly decamp to live in Shrek's swamp. Faced with these unwanted tenants Shrek strikes a deal with the Prince, promising to find and return with Princess Fiona (Cameron Diaz), marriage to whom will finally confer on the Prince his kingly status. In return the Prince promises to evict the various characters living on Shrek's land. Shrek's task is further irritated by the unwanted company of a tirelessly wise-cracking Donkey (Eddie Murphy), and while their adventure bears all the hallmarks of a classic fairytale, nothing turns out quite like they expect.