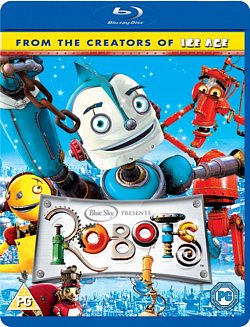 Livrare estimata pentru 21 Dec - 31 Dec
Adauga in cos
Adauga in Wishlist
Descriere: Acest film nu are subtitrare in limba romana.
Animated family comedy featuring the voices of Ewan McGregor, Robin Williams and Halle Berry. Rodney Copperbottom (McGregor) is a small town robot who has a gift for inventing things and a hope of moving beyond his quaint surroundings. He works side by side in a restaurant with his dad who is a dishwasher - literally a dishwasher. You open his chest and load in the dishes. Rodney has dreams of something greater. Armed with his unique talent for inventing, Rodney embarks on a journey to Robot City to meet his idol, the majestic inventor Bigweld (Mel Brooks). An iconic figure in all of Robot City, Bigweld has spent a lifetime creating things to make the lives of robots better. Once in Robot City, Rodney finds that things are not quite as he expected, and his quest may be a lot harder than he imagined. As he tries to navigate his way around this new city, Rodney befriends the Rusties, a ragtag group of street-smart bots who know the ropes. One of the Rusties, Fender (Williams), immediately becomes Rodney's best friend and even lets his spunky kid sister Piper Pinwheeler (Amanda Bynes) tag along. They take him in, and for now, at least, Rodney has a home in Robot City. Rodney also meets Cappy (Berry), an executive at Bigweld Industries who takes an instant liking to Rodney and sees a lot of herself in him. Along their adventures, Rodney and his new friends encounter unsavoury characters who try to derail Rodney's plans to find Bigweld and save Robot City.
Din aceeasi serie:
Robin Hood Blu-Ray Robin Hood DVD Robinson Crusoe 3D+2D Blu-Ray Robinson Crusoe DVD Robosapien DVD Robots 2005 DVD Rock Dog DVD Ron's Gone Wrong 2021 Blu-ray Ron's Gone Wrong 2021 DVD Room On the Broom 2012 DVD Alt