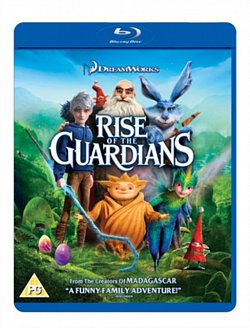 Rise of the Guardians 2012 Blu-ray

DreamWorks computer-animated family adventure film based on the book series by William Joyce. When the nightmare king Pitch (voiced by Jude Law) launches his evil plan to engulf the whole world in darkness, the Guardians - Santa Claus (Alec Baldwin), the Tooth Fairy (Isla Fisher), the Easter Bunny (Hugh Jackman) and the Sandman - enlist the help of a young and reluctant Jack Frost (Chris Pine) to stop Pitch in his tracks and protect children everywhere. But with the powers of the Guardians waning, will they be able to convince the world's children of their existence and overcome the power of Pitch?