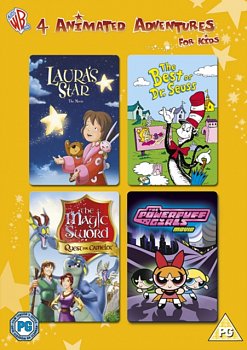 Collection of children's animated adventures. 'Laura's Star' (2004) is a magical animated adventure based on the best-selling bedtime story book by Klaus Baumgart. Laura (voice of Celine Vogt) is an unhappy seven-year-old girl who dreams of being an astronaut. One night, a five-pointed star the size of a pillow falls out of the sky and is patched up by Laura with Elastoplast. This new friend brings her nursery toys to life and enables her to fly. As the star begins to lose its powers, Laura seeks the help of the boy next door to bring it back to life. The legend of King Arthur is provided with a musical instalment in 'The Magic Sword' (1998). When Arthur (voiced by Pierce Brosnan)'s fabled sword, Excalibur, is stolen by Lord Ruber (Gary Oldman), plucky young Kayley (Jessalyn Gilsig) sets out to retrieve it. She is aided in her quest by handsome blind servant Garrett (Cary Elwes) and a two-headed, Elvis-singing dragon named Devon (Eric Idle) and Cornwall (Don Rickles). Together they battle to save Camelot from the evil Ruber. 'The Best of Dr Seuss' (2000) contains three animated versions of Dr Seuss favourites. In 'The Butter Battle Book' (1989), the Zooks and the Yooks are at war. The Zooks argue that the bread should be buttered side up, while the Yooks insist it should be buttered side down. 'Daisy Head Mayzie' (1995), narrated by the Cat in the Hat, tells the story of young Mayzie McGrew who wakes up one morning to discover that a daisy has sprouted from the top of her head. At first her classmates tease her - but they change their views when Mayzie becomes a celebrity. In 'Horton Hatches the Egg' (1942) Lazybird Maisie is tired of sitting on her egg, and she manages to persuade the faithful Horton, an elephant with a jumbo-sized heart, to do the job for her. 'Powerpuff Girls: The Movie' (2002) tells of how Professor Utonium attempts to fix the wrongs of the lawless world in which he lives by creating a little girl who can tell right from wrong. However, a mistake in the laboratory leads to unexpected results, and Utonium ends up with not one, but three perfect little girls, each with a super-special power. After going through various rites of passage, the girls realise they must use their gifts to rid the city of evil and promptly prepare to take on the criminal might of trickster monkey genius Mojo Jojo.