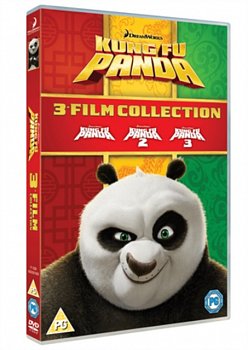 Triple bill of animated family adventures about a panda named Po (voiced by Jack Black). In 'Kung Fu Panda' (2008) Po works in his father's noodle restaurant. His Dad (James Hong) wants him to take over the restaurant one day, but Po really wants to learn kung fu. The problem is, with his weight, size and clumsiness, Po just isn't cut out for mastering the martial art. But then, by accident, he is thrown into the world of the great kung fu artist, Master Oogway (Randall Duk Kim), who believes that Po is the legendary Dragon Warrior. According to Oogway's vision, the Dragon Warrior will save the Valley of Peace from the evil snow leopard, Tai Lung (Ian McShane). The man given the task of training Po is Master Shifu (Dustin Hoffman) who finds it extremely difficult to believe that his new student is really the Dragon Warrior. In 'Kung Fu Panda 2' (2011) Po is now a kung fu master, spending his days working alongside Master Shifu (Hoffman) and The Furious Five - Monkey (Jackie Chan), Crane (David Cross), Tigress (Angelina Jolie), Viper (Lucy Liu), and Mantis (Seth Rogen) - to protect the Valley of Peace. But this harmonious new existence comes under threat from the evil emperor peacock Lord Shen (Gary Oldman), who has developed a deadly new weapon with which he plans to conquer China and destroy the ancient art of kung fu. In 'Kung Fu Panda 3' (2016) Po's biological father (Bryan Cranston) shows up and he takes him on a journey to see where he really belongs. When he meets Mei Mei (Kate Hudson), a girl panda who was promised to him as a wife on his return, Po finds that he no longer fits in with the panda crowd. As he tries to settle in, the pandas tell him of an evil ancient spirit called Kai (J.K. Simmons) who is stealing the powers of the kung fu masters. In a last-ditch attempt to save the colony from total destruction, Po vows to teach everyone the art of kung fu so that they can defend themselves when the time comes.