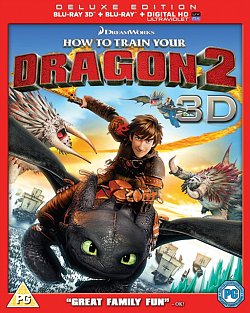 Academy Award-nominated animated comedy adventure sequel based on the children's novel by Cressida Cowell. Five years after having brought together dragons and Vikings on the island of Berk, Hiccup (voice of Jay Baruchel) and his dragon Toothless now spend their days soaring through the clouds searching for unchartered lands. But after discovering a previously unknown cave where a large colony of wild dragons live, the pair soon find themselves at the heart of a new adventure, as they try to keep the peace and attempt to change the future of humans and dragons forever. The movie won the Golden Globe Award for Best Animated Feature Film.