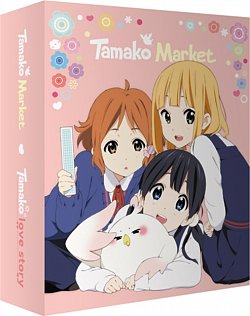 Anunta-ma cand pot comanda
Adauga in Wishlist
Descriere: Acest film nu are subtitrare in limba romana.
All 12 episodes of the Japanese anime, as well as the feature film sequel. In 'Tamako Market', relatively shy and awkward high school student Tamako Kitashirakawa (voice of Aya Suzaki) meets a talking bird named Dera (Takumi Yamazaki), who proclaims to be descended from royalty and looking for a bride to bring back to his native country. However, when the bird develops a taste for mochi from the bakery owned by Tamako's parents the bird gains so much weight that he is unable to fly far without growing increasingly tired. As Dera takes up residence in Tamako's home he becomes part of her life and shares in the trial and tribulations of being a teenager as Tamako's neighbour Mochizou (Atsushi Tamaru), whose parents also run a mochi bakery, struggles to open up about his true feelings for her. The episodes are: 'That Girl's the Daughter of a Mochi Shop Owner', 'A Valentine's Day Blooming With Love', 'Hot Hot Hot Over That Cool Girl', 'A Small Love Has Bloomed', 'We Spent the Night Together', 'I Felt Chills Down My Spine Too', 'She Went to Be a Bride', 'Don't Call Me a Chicken', 'Singing a Love Song', 'A Flower Blooms On Her Baton', 'Who Knew She'd Be a Princess?' and 'Another Year Ends'. In 'Tamako Love Story' (2014) the story revolves around Tamako and Mochizou's final year of high school as both contemplate their future plans. Tamako's main focus is doing well in her baton performance, however, for Mochizou he knows it is his final opportunity to come clean and declare his love for Tamako.
Din aceeasi serie:
Tales From Earthsea DVD Tales of Vesperia: The First Strike 2009 Blu-ray / with DVD - Double Play Tales of Vesperia: The First Strike 2009 DVD Tamako Love Story 2014 Blu-ray Tamako Market 2013 Blu-ray Tatsumi 2011 DVD Tenchi Muyo OVA Collection Blu-Ray Tenchi Muyo OVA Collection DVD Tenchi Muyo OVA Collectors Edition Blu-Ray Tenchi Muyo! - War On Geminar: The Complete Series 2009 Blu-ray / Box Set with Digital Copy