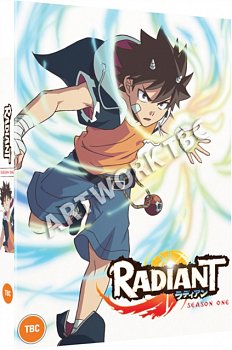 Livrare estimata pentru 15 Dec - 25 Dec
Adauga in cos
Adauga in Wishlist
Descriere: Acest film nu are subtitrare in limba romana.
All 21 episodes of the first season of the Japanese anime based on the comic book series by Tony Valente. Monsters known as Nemeses drop from the sky and infect everyone within the vicinity, resulting in them becoming cursed. However, surviving such an attack also means you gain magic abilities and such people become known as Sorcerers. Teenager Seth (voice of Yumiri Hanamori) is a Sorcerer and dreams of ending the persecution that Sorcerers face from the rest of humanity. In order to do so he sets out to destroy the Nemeses once and for all by travelling to their place of origin, Radiant. Along the way he enlists the help of Mélie (Aoi Yuuki) and Doc (Shintarou Oohata). The episodes are: 'The Young Sorcerer - Seth', 'True Courage - Bravery', 'The Day of Departure - Alma', 'A Meeting in the Sky - Encounter', 'A Paradise of Wisdom and Hope - Artemis', 'Drops of Friendship - Melie', 'The Beast of the Underground Water System - Monster', 'Proof of Strength - Progress', 'Those Who Hunt Heretics - Inquisition', 'Broom of Memories - Memory', 'The City That Roars Like Thunder - Rumble Town', 'The Shadow Lurking in the City - Darkness', 'Overture of Turbulence - Storm', 'The Bell Tolls the Sound of Destruction - Catastrophe', 'With Fists Like Shooting Stars - Burst', 'Fly High and Pierce Through the Storm - Rising', 'To Stop the Sound of the Wind - Serenade', 'The Light That Follows the Darkness - Awakening', 'The World That You Changed - Relief', 'Omen - Sign' and 'In Search of the Future - Utopia'.
Din aceeasi serie:
Puella Magi Madoka Magica: The Movie - Part 2: Eternal 2012 DVD Puella Magi Madoka Magica: The Movie - Part 3: Rebellion 2013 Blu-ray Puella Magi Madoka Magica: The Movie - Part 3: Rebellion 2013 DVD Punch Line Season 1 Collection DVD Radiant: Complete Season 1 2019 Blu-ray / Box Set Radiant: Season One - Part One 2019 Blu-ray / with Digital Copy Radiant: Season One - Part One 2019 DVD Radiant: Season One - Part Two 2019 Blu-ray / with Digital Copy Radiant: Season One - Part Two 2019 Blu-ray / with DVD and Digital Download (Limited Edition) Radiant: Season One - Part Two 2019 DVD