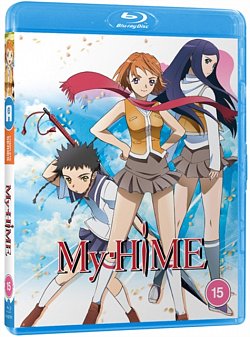 Livrare estimata pentru 17 Jul - 27 Jul
Adauga in cos
Adauga in Wishlist
Descriere: Acest film nu are subtitrare in limba romana.
All 26 episodes of the Japanese anime series. Mai Tokiha and her younger brother Takumi have just transferred to the Fuka Academy, where a lot of strange things have been happening lately. There, they learn of the existence of HiME, girls with super-natural powers, capable of summoning powerful entities called 'Children'. Slowly Mai realises that she has the gift and is one of the HiME, although her powers have not fully formed yet. The HiME are gathered at the Academy to fight the Orphans, demonic creatures not from another world. However, a mysterious group has different plans for them, and the HiME will not only have to put their own lives on the line in the upcoming battle, but also what's most precious to them.
Din aceeasi serie:
My Neighbours The Yamadas Blu-Ray+DVD My Neighbours The Yamadas DVD My Teen Romantic Comedy SNAFU Season 1 Blu-Ray My Teen Romantic Comedy SNAFU Season 1 DVD My Teen Romantic Comedy SNAFU Season 2 Blu-Ray My-HiME: Complete Collection 2005 Blu-ray / Collector's Edition Box Set Mysteria Friends 2019 Blu-ray / Collector's Edition Mysteria Friends: Complete Collection 2019 Blu-ray Mysterious Girlfriends X Collection DVD Nadesico the Movie: The Prince of Darkness 1998 Blu-ray