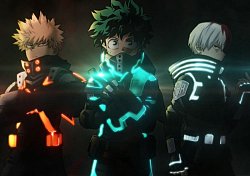 Feature-length anime triple bill based on the manga by Kohei Horikoshi and set in a world where the majority of the population possess superpowers known as Quirks. In 'Two Heroes' (2018), student Izuku Midoriya (voice of Daiki Yamashita) dreams of one day becoming a hero despite the fact he doesn't have a Quirk. Determined to achieve his goals, Izuku attends The Hero Academy and soon catches the eye of renowned hero All Might (Kena Miyake) who agrees to train him. When All Might is invited on a trip to I-Island where they conduct experiments on Quirks, he asks Izuku to accompany him, but he must promise not to divulge details of their shared Quirk that they call One For All. In 'Heroes Rising' (2019), Izuku and former enemy Katsuki Bakugo (Nobuhiko Okamoto) now fight on the same side to defend themselves against their biggest ever threat, the villain Nine (Yoshio Inoue). Finally in 'World Heroes Mission' (2021), a cult known as Humarise fears that Quirks will become so powerful that humanity will face extinction. Because of this they have planted bombs all over the world filled with a toxin that causes people's Quirks to spiral out of control, which leads to their deaths. When the first bomb detonates, Izuku, Katsuki Bakugo and Shoto Todoroki (Yuki Kaji) are sent to investigate but when Humarise frame Izuku for murder, he must go into hiding. Can they locate and disarm the remaining bombs before it's too late?