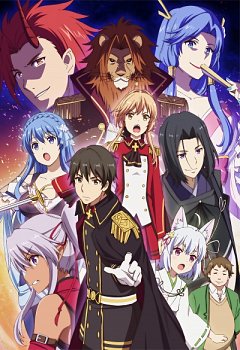 How a Realist Hero Rebuilt the Kingdom: Part 1 2021 DVD

The first 13 episodes of the anime based on the light novel series. Following the death of his grandfather, trainee civil servant Kazuya Souma (voice of Yusuke Kobayashi) is left directionless and alone. Suddenly, however, he finds himself transported to the land of Elfreiden, a country from another world which has been under attack from the hordes of the Demon Lord for the past decade. Rather than be a hero who fights to save the day, Kazuya instead decides to overhaul the country's economic system and introduce reforms. When the king abdicates out of the blue and places Kazuya in charge, he sets out to form a group of talented citizens to aid in running the country. The episodes are: 'First Begin With a Hero', 'If You Possess an Aptitude, We'll Make Use of It', 'Let Not Me Be a Loyal Minister', 'The Forefinger Twitches', 'Well Fed, Well Regarded', 'The Wise Man Never Forsaketh an Advantage', 'Thus Said the Elder', 'The Forest in Labour', 'Contrary to Wishes', 'No Place of Joy Hath a Soldier', 'Sacrifice the Plum Tree to Preserve the Peach Tree', 'When You Surround an Army, Leave an Outlet Free' and 'To Fight and Conquer in All Battles Is Not Supreme Excellence'.